Our combined history and contacts within the music realm not only provide our clients with great working liaisons with major and indie labels and publishers, but also direct relationships with prime artists and composers themselves.  We pride ourselves on collaborating and bringing together the best talent and securing quality resources despite budgets and challenging new media.

Lilah Obregon-Wilson, celebrated her love of music within the Chicano soul and Cha Cha dance crew and D.J. scene that merged out of East LA, in the mid ‘90s. After school she immersed herself into the realm of music when deciding to open opened her bar/coffeehouse/venue, The Lucky Cat, in Williamsburg, Brooklyn in 2003.  The establishment featured regular live events including performances from artists such as: Sharon Jones, The Budos Band, Lee Fields and the Expressions, Naomi Shelton, Vic Thrill, Reggie Watts, a nascent TV on The Radio, Very Be Careful, King Missile III, as well as a top selection of renowned underground DJs from NYC, Latin America and Europe.

Post-Lucky Cat, Lilah brought her music relationships and legal expertise (JD, Benjamin N. Cardozo School of Law ’01) into the world of advertising first; as a Music Producer/Supervisor at a music house in NYC and then on to J. Walter Thompson, where she was made head of the Music and Radio Department (2009).  Wilson was the key point person for anything music-related going through the agency — including: creative development, budgeting, clearance and production on major campaigns and new business pitches.  Her JWT clients included: Microsoft Bing, Rolex, Smirnoff, Macy’s and Royal Caribbean among many others.  She then moved on to freelance, developing a roster of clients to include: Baron and Baron, Michael Kors, Coach, Sephora, Estée Lauder and Vogue.

Intrigued with motion pictures, television and overall media production, Lilah kicked off her film career with “We Are Young” and Sundance’s Audience Award winner, “Sleepwalk with Me.”  She has since worked on numerous films, theatre and TV/Webseries projects, including: 2017’s Berlinale’s 2nd place Audience Award winning music documentary, “Chavela.”  Most recently, she worked on the Annie nominated, virtual reality film, “BattleScar,” which premiered at the 2018 Sundance Film Festival at their new permanent VR theater, The Ray.

In addition to extensive film work, Lilah has moved into production itself.  This has included casting and recording for commercials and motion pictures, art direction, events and installations, including the installation, art direction and launch of Mexican artist, Gilberto Navarro Aceves’, “Bicycles,” a six month art installation of 122 sculptures that were installed in 11 locations in NYC.  In addition, she has served as  producer, art director and music supervisor on the “Bros” web series.

Lilah is a member the Guild of Music Supervisors and also acting board member of the Golden Hornet Organization. 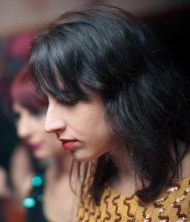 Kristina Benson is a lifelong music professional, starting with a degree in opera from UCI and piano lessons in her spare time under Miles Davis sideman Kei Akagi. After stints as a promoter and DJ, she segued into a role as a branding specialist for DoStuffMedia , where she spearheaded engagement initiatives for brands such as Goose Island, Grey Goose and Pabst Blue Ribbon, working closely with local influencers producing interactive brand experiences.

She went from there to acting as Music Director for Lip Sync, where she managed all day to day operations, including creative pitches, clearance, and custom music, working closely with top flight talent such as the Violent Femmes, Charles Bradley, Lindsey Stirling, Hanni el Khatib, and Steve Aoki.

Custom music she produced (and wrote) in her role as Director were successfully integrated in campaigns for Coach and Bridgestone Tires, and placed on primetime shows such as Pitch, Orphan Black, and Bones.  Currently she directs marketing and brand partnerships for her own L.A. RECORD magazine, acts as a consultant for the boutique label Innovative Leisure, and assists with clearance for Disco Cha Cha, a New York based supervision agency.